Please note that these figures are not suitable for use as line fusiliers.

I would like to thank Mr. Peter Bunde (Brigade plates) and Mr. Peter Hofschroer (the author of the Osprey books on the Prussian army of this period) for their advice and assistance, particularly as concerns the appropriate poses for the marching and trail-arms figures.

These figures have been designed to appear as Prussian line musketeers would have done on campaign. As such, all figures have:

The breeches were grey worn tucked into the black gaiters or marching boots (for NCOs only).

All belting was white for musketeers. Note that the chest strap for the back pack was often worn under the greatcoat roll to facilitate the easy removal of the grey greatcoat. The leather sheath on the greatcoat roll was, in fact, the foul weather cover for the musket lock and was placed around the greatcoat for convenience (this information supplied by Alfred Uhmey via Peter Bunde). Reliable illustrations show infantry but not officers wearing the leather sheath on their greatcoats since officers did not carry muskets.

The pack and sabre scabbard were of red-brown leather as was the musket sling. The cartridge pouch was black with an oval brass metal plate on the cover. Sword knots were white with a toggle in company colour which is impossible to paint on a 25mm figure so don’t bother with it! The canteen strapped to the pack was covered with a canvas (off-white) cover the same colour as the haversack worn on the left hip. No water bottles are seen on Prussian line infantry until after the Napoleonic Wars, I can only conclude that this item was carried in the canvas haversack.

NCO distinctions were gold lace on collars and cuffs and the black leather marching boots.

Musketeer officers wore a coat of the same colour as the men with the same facing colour combinations but the tails of the coat were longer and the epaulets worn on the shoulders had silver lace piping according to rank. A new type of shoulder strap with distinctive gold crescents was introduced in 1814 but was not in widespread use in the infantry until after the Napoleonic wars. The officers also wore a silver sash at the waist. In the field officers wore grey overalls with a red stripe and a row of gold buttons down the outside seam. Musketeer officers carried a straight bladed sword in a red leather sheath. Not infrequently, the officers wore a grey frock coat (uberrock) instead of their kollet when on campaign. This had a collar in provincial colour with the usual rank epaulets at the shoulder and sash at the waist but no other facing or rank distinctions. Officers on foot always wore a backpack the so called 'badge of dishonour' introduced after the 1807 reorganisation of the army.

Mounted officers wore the same uniforms as described above. Shabraques were usually black 'bearskin'. Knotel has a number of illustrations of a dressier shabraque in red with a gold border and matching holster covers of a very distinctive type with the pistol handles poking visibly over the top of the cover. I will use this shabraque to mark higher ranking mounted officers. Saddles were often in brown leather but all other horse furniture was in black leather.

Flags were carried by senior NCOs. Several reliable illustrations show these men wearing what appears to be a double greatcoat roll. It took me some time to work out that one is indeed the greatcoat roll while the other is the rolled up cover for the flag. This was usually of black oilskin.

Musicians had ‘swallows nests’ at the shoulders in facing colour with white piping. Those regiments with white facings had red swallows nests. The protective apron on the left knee was of the same calf-skin material (and colour) as the packs.

Unless you want to spend a lot of time and money pursuing original sources such as the Knotel and Brauer plates, the best modern source is undoubtedly Peter Bunde’s Brigade plates. Another good source of information is the third book in the series – 'Les Planches De La Belle Alliance'. This book reproduces the cards from the famous (and now difficult to find) Sturm cigarette album for the 1813 -15 'War of Liberation'. A last source worth mentioning for those of you with deeper pockets is the new re-print by LCV of Clement's 'Napoleon en Allemagne'. Although the text has been faithfully reprinted, LCV asked Alfred Uhmey to provide the documentation (illustrations) for a book originally bare of these. Alfred Uhmey is renowned for his collection of Napoleonic items and illustrations and has gathered in one (expensive) book many illustrations relevant to the armies engaged in Germany in 1813. His illustrations of the Prussian army are some of the best I have seen in any single book including Knotel plates and paintings, Brauer plates and some of the cigarette cards mentioned previously. 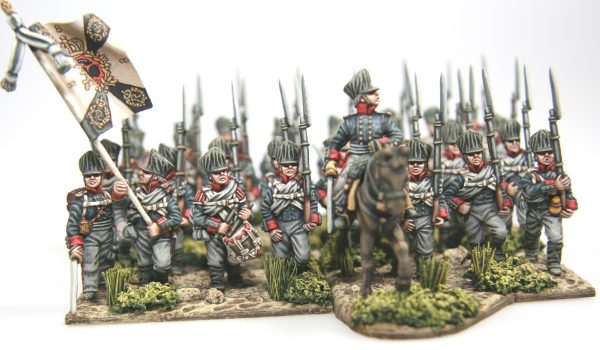 Click on the picture to see a larger version (1,177Kb) in a new window.

Musketeer officers were armed with a straight bladed 'Degen'. All foot officers were required to wear a back pack, the so-called, 'badge of dishonour'. Most officers also wore the greatcoat roll like the men, as it afforded them some protection against sword and bayonet thrusts.

According to Mr. Hofschroer, this is the correct pose for advancing Prussian infantry. The musket was carried in this fashion until the advancing infantry were about to make contact with the enemy. At this point the porte arms position was adopted. The reason for this was that the musketeers were armed with short swords which needed to be restrained when the men were moving at speed. The men were trained to advance holding the musket in their right hand while their left held the sword.

Click on the picture to see a larger version in a new window.

The following figure packs are compatible with the above but can also be used with the trail-arms and charging sets soon to be released.