This is normally the final section of my release notes. In this case however I am promoting it to my opening paragraph as these figures will be more expensive than usual. Each pack contains four figures and four horses. The pack price will be Ł8 per pack. I do not believe in ‘special’ prices for ‘character’ figures such as bareheaded, forage, or casualty items unless they take more metal to produce (as is the case with the prone casualties). However, these particular figures have involved considerable effort. They have taken 3 months to research and produce and remain labour intensive to cast and pack. Each of the four packs has elements from at least three different moulds and every figure has been individually sculpted to make them real personalities. All sets have been designed to come together as a vignette so that the figures look as if they relate to each other. Since most customers will only need one of these sets to command their brigade, the price reflects the labour involved in relation to the expected sales.

The Prussian army of this period was organised into three corps. For the campaign in Germany in 1813 these were separated and placed in three of the four allied army groups. Blucher commanded the Army of Silesia but only one of his corps was Prussian (with York in command) the rest were Russian. The commanders of the two other Prussian corps were Bulow and Kliest. For the Waterloo campaign a fourth corps was added and the army operated as a joint entity. In this case the corps commanders were Zieten, Pirch, Thielmann and Bulow.

All corps were organised into four brigades. Each of these had three infantry regiments of three battalions. In 1813 these also had one or two regiments of cavalry attached and at least one 6pdr. battery so that each brigade was a self contained fighting force of all arms. In addition to these four brigades there was a separate cavalry reserve of at least one brigade (some had two cavalry brigades). Each of these reserve cavalry brigades was composed of (at least) three regiments of cavalry. There was also an artillery reserve with its own command element.

This first release of four command sets is designed to cover the four ‘infantry’ brigades that composed the real fighting element of each Prussian corps. Each set is made up of a General, his ADC, a General Staff officer and a Feldjaeger. Command groups for the cavalry and artillery reserves of the corps will follow.

Uniform Notes for the Generals and Their Staff

The preferred order of dress of the Prussian general officer in the field, as well as that of his staff, was the uberrock (frock coat) and the peaked cap. There is little doubt about this although uniform plates of officers wearing these items are rare. This ‘undress’ clothing was considered personal rather than regulation wear, so it was not a uniform item in reality. What this means is that the cut of the Ubberock was not prescribed, it was down to the officers’ (and their tailors’) fashion sense so making it difficult for an artist to represent a ‘standard’ uberrock (this information supplied by Peter Bunde). Infantry generals (and their staff) had grey uberrocks and caps, cavalry had blue ones. The lapels of the uberrock were lined in red and could be turned back to expose a flash of colour at the neck. The cuffs were plain. There is evidence in some of the better battle paintings that many officers’ uberrocks may have had the buttons and retaining straps sewn onto the garment at the shoulder to enable them to attach shoulder straps or epaulets. It is rare to see shoulder straps or epaulets on the uberrock so these attachments remained unused. I have sculpted the buttons and retaining straps on the figures for the sake of historical accuracy; the buttons should be in gold and the retaining straps in silver.

Generals sometimes wore their Kleine uniform in the field. The literal translation of this is the ‘Little uniform’ a better translation might be the ‘simple’ uniform. This was basically a blue kollet with red collar, cuffs and turnbacks. There was no lace on collar or cuffs. The cuffs were ‘Swedish’ cuffs with two gold buttons as the only decoration. The shoulder straps were plaited silver wire. The ADCs and other staff officers often wore the Liebrock on campaign. This was blue for both infantry and cavalry ADCs. The jacket was single breasted and had a large fold down collar. This collar was green for ADC’s (frequently, but not always, piped in red) and red for staff officers. The Swedish cuffs were similarly coloured. Turnbacks were red for infantry officers and white for cavalry. The field of the shoulder strap also differed for cavalry and infantry officers. It was white for the former and blue for the latter. The officer’s rank lace on these epaulets was silver for both. The lapels of the Liebrock were also lined in red and could be turned back to expose the coloured lining.

Officers were not supposed to wear the silver waist sash when wearing the uberrock or the Liebrock. This regulation was generally disregarded and most officers wore the sash in the field with both items of clothing (although it seems to have been less frequently used with the Liebrock).

All officers’ saddle cloths are described as being made of black bear fur. Generals and staff officers had ‘guard’ stars at the rear of the saddle cloth and on the pistol holster covers. ADC’s had no stars on their saddle cloths. The stars were silver with an orange centre.

Many officers wore medals and other decorations on their coats. These were principally iron crosses of various classes but generals also wore a silver star to the left of their chest. All coat buttons were in yellow metal. Sword straps were silver.

Although I have described the uniform details above, I need to emphasise the importance of these officers in the context of these brigade command groups. Until I did the research I did not appreciate the special status of these officers in the reformed Prussian command setup. Each brigade and corps commander had a general Staff officer attached. These can best be described as a parallel commander. The General Staff officer’s job was to remind the brigade commander of the army’s plan of action and to ensure that the General’s actions complied with this plan. He was an advisor to the brigade commander but not a subordinate as such. He was answerable only to the head of the General Staff (Gneisenau, after Scharnhost was injured) who in turn reported directly to the king. It would be fair to say that the brigade was under dual command, the general gave the orders but only as long as these complied with the plans of the General Staff!

This corps was a legacy from Fredrick the Great. They were the staff couriers and guides. All the men in this formation were either NCOs or officers. Their special status was reflected in their uniforms, not only were these green in colour, but the NCOs uniforms were cut like the officers’ so that they had long tails and officer-type shoulder straps. Officers and NCOs uniforms differed only in that the officers wore the silver waist sash and had silver rank distinctions on their shoulder straps. The NCOs had gold piping on their shoulder straps and no waist sash.

All Feldjaegers wore green jackets with red collars cuffs and turnbacks and grey cavalry overalls. The field of the shoulder strap was green. On campaign the covered shako completed the uniform. They all carried sabres in white metal scabbards and a red leather satchel for carrying dispatches and orders. The saddlecloth was green with a broad yellow edging stripe. They also carried a brace of pistols in bearskin covered saddle holsters.

Most of these figures have been designed to fit specific horses. Some of these figures are the first to be sculpted to fit on Alan Marsh’s ‘Dynamic’ horses. These figures come in a plastic bag with the horses they are designed to fit. The exception to this is in Set Two. Since three of the figures are standing, their horses are designed to look as if they are tethered together. There is a sprue in the pack with lengths of metal rope which will need to be glued to the holes in the horse’s heads to make them look as if they are tied together (the central horse in the group is the one with three holes in it’s head). Some filling may be required. The long length of rope goes from the central horse’s head to the hand of the ADC. Set Three also has a standing feldjaeger figure holding the reins of his horse. Note the point on the left of the horse’s head where the feldjaeger’s fingers have made an impression in the reins to mark the point where the two figures join. 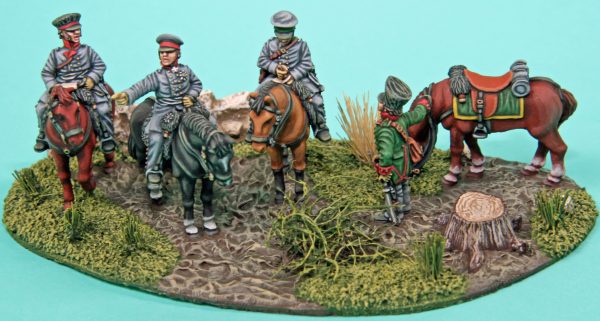 Click on the picture to see a larger version (114Kb) in a new window. 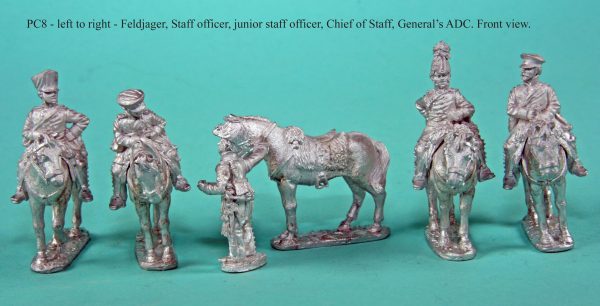