This set of figures has been planned and researched for over two years. The main problem has been acquiring reliable information concerning the size, dimensions and construction specifics of the guns themselves. Once again, I must give credit to Peter Hofschroer for providing the detailed information I required. He provided me with a roll of microfilm on which were line drawings of Prussian artillery equipments, drawn between 1815 and 1818. The artillery pieces limbers and caissons described below have been put together using these details. 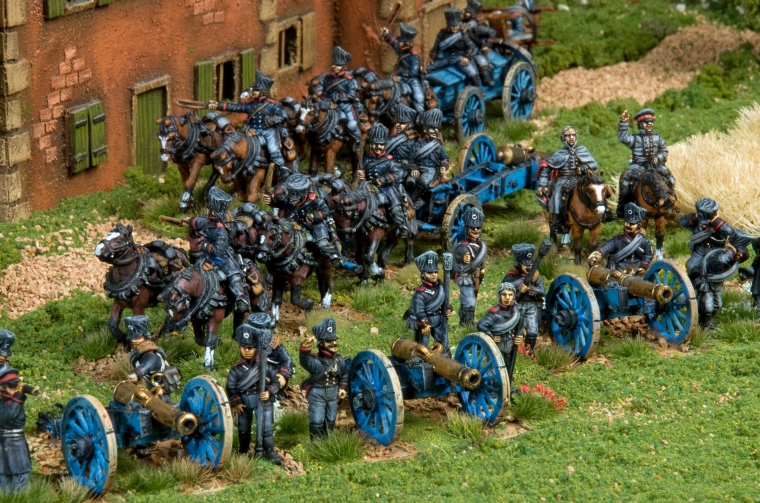 Figures painted and photographed by Stephen Maughan of Napoleonic Archive

The detail for the rammers and handspikes held by the figures described below is taken from the line drawings of the Prussian artillery equipments provided by Peter Hofschroer. The drag ropes which can be seen on the right leg of some of the gunners (taken from the same source) seem to have been attached to a waist belt. One end of the drag rope had a hook on it. This could be detached from the belt and could then be hooked on to the end of a longer rope attached to the gun.

These figures have been designed to fit broadly into three teams:

PA5 is a general purpose figure. Don’t stick rigidly to the above teams. Mix and match figures from different teams to get the best effect!

I have found no illustrations of NCOs. However, Knotel gives a very complete description of what they looked like in the text which accompanies one of his plates of a foot artillery gunner - "NCOs: golden lace on the collars (and cuffs)...marching boots (allowed by Royal order 1812), small pouches trimmed like those of the gunners, black shoulder belt decorated with brass plate, needles and small chain. Since 1810 The black sabre belt was decorated with the oval brass plate of the fusiliers’ NCOs ."

A passing comment on a Knotel print of an artillery officer inspired the final figure. "The frock coat - in 1808 of grey colour - gradually changed to black (Horse Artillery: blue), black velvet collar with red piping." The forage cap would have been of the same colour as the coat. Trousers, grey with a red stripe down the side. A very distinctive figure!

All these figures wear the campaign uniform of the Horse Artillery. The gunners wear the Litewka. This was Prussian blue in colour. Only the collar was in the artillery facing colours (black with red piping). I think the cuffs had a line of red piping along their upper seam, but I have been unable to confirm this to my satisfaction.

Two of the officers (the mounted one and the one on foot pointing with the sword) wear the officer's campaign dress. This was a tail coat very similar to the French surtout, single breasted but seemingly with facing colours on collar, cuffs, turn backs and piping along the bottom edge and breast of the jacket. This was also Prussian blue.

The last officer, wears the uberrock and fatigue cap. I designed this officer with the battery commander in mind, as it was the higher-ranking officers that tended to wear these uniform items. Unlike the infantry officer's uberrock, cavalry officer's coats were made of blue cloth, as was the forage cap. This makes the officer's coat look similar to the gunner's litewka. The main difference was in the quality of the cloth and the tailoring; for example, the officer's collar was made of black velvet. Unfortunately, this is impossible to sculpt into a 25mm figure.

All belts were white leather. Sword scabbards in plain steel for the gunners although officers seem to have had theirs in yellow metal. All leather trappings on the horses in black leather.

Note that Knotel shows the trooper's saddlecloth bulging substantially in front of the mounted gunners/troopers. Having done the research; this bulge covered both the brace of pistols and the trooper's greatcoat. How they managed to extract their pistols when required puzzles me!

The valaise on the rear of the saddle and the canteen box were covered in grey cloth and attached to the saddle with black leather straps. The officers seem to have had the edges of their valaise piped in red. The wallet on the side of the saddle contained items for the grooming of the horse, some references state that they carried spare horseshoes. Forage bags were linen coloured or grey.

These guns have a set of four rings on the tail of the trail through which the handspike would have been fitted to move or aim the gun. The only way this detail could be cast on a gun this size was for the rings to be filled in. It is a simple matter to drill out the rings using a pinvice or twist drill. Alternatively, leave the rings as they are. Once the guns are painted the fact that the rings have been filled is not obvious.

Firstly the reseach has taken ages. I had assistance from Peter Hofschroer who was able to provide copies of original construction drawings for the limbers and caisson. The models I describe below are faithful representations of these drawings in 30mm scale (which is the true scale of my figures). However, the harnessing arrrangement for the team of horses was shown unassembled in the drawings, making it extremely difficult to piece together; especially when the explanation was in old German. Basically, the harness drawings were next to useless. I scoured all my reference material and even wrote to a number of museums. In the end, I was only able to come up with two pictures of Prussian teams. They are both drawings by Knotel of Prussian limbers on the move. The problem with these is that the limbers are both represented moving away from the viewer, so that the harnessing arrangement at the rear of the horse can be made out, but the front is obscured. As a result I can assert that the harnessing at the rear of the horse is correct, but that the front harnessing is a mixture of conjecture, what I could glean from the disassembled drawings and Prussian limbers from later periods (i.e. from the Franco-Prussian war). I have particular concerns about the collar and can only say that it was something like this from what I can see of them in the Knotel drawings. 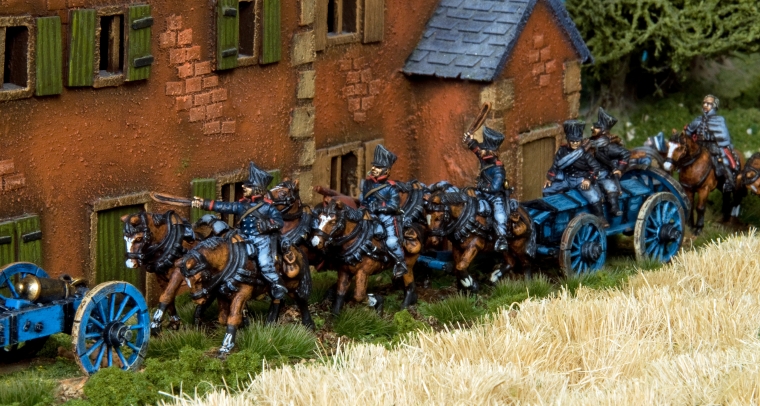 Figures painted and photographed by Stephen Maughan of Napoleonic Archive

Further headaches started when the pieces were complete and ready to go in the moulds. I wanted to keep assembly to a minimum which resulted in masters that were too big to go in my existing mould cans. I have had to invest in new equipment and learn how to use it.

Lastly, and most directly relevant to the horse artillery, the Knotel drawings made one thing clear - the drivers of horse and foot artillery teams wore uniforms in keeping with the artillery arm they were serving. In other words, there was no single uniform for artillery team drivers. The foot and horse artillery drivers had different uniforms.

These models include a length of copper wire which can be used to form the reins and tracers between the horses and the limber. This is not essential as the limber and horses look right when assembled on a base. However, for those of you who like to put in the finishing touches, I have included the wire.

I suggest that you glue, or preferably solder, the wire to the attachment points on either side of the horse (these are below the saddle and continue on from the length of chain attached to the horse’s collar). Paint the horse and limber but leave the cross pieces at the ends of the limbers unpainted. Now glue or solder the ends of the traces to the unpainted cross pieces and carefully paint the cross pieces and the traces. The pair of horses at the front of the limber do not attach directly to the limber but to the base of the collar on the second pair of horses. Once again I suggest that you attach the traces to the lead pair and leave the attachment points on the collar of the second pair unpainted until you are ready for the final assembly.

The riders horses can be distinguished from the off-side horses by the proper valaise at the rear of the horse. The saddle is also more elaborate and has a saddle cloth underneath it.